It seems that Covid-19 has disrupted so much of our lives.  However, Emma Sosa, class of 2017, has not let this impact progress on her PhD research.  When she had to leave her research lab when her school went remote, Emma reached out to the geology department to borrow one of our microscopes, so she could continue making progress on her work.  Happy to help one of our alumni, here is some of the results of her work. 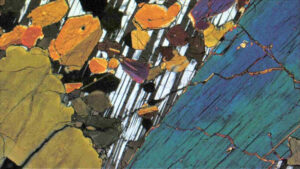 Xenoliths (fragments of foreign rock that are not derived from their host magma) from the earth’s upper mantle and lower crust allow us to study these normally inaccessible regions of the planet. For part of my PhD at Caltech, I have been studying a suite of xenoliths from Adak island in the central Aleutians arc in an effort to understand how magmas are produced in this location. The magmas from which these xenoliths were collected are called adakites, a type of andesite with unusual geochemical characteristics which suggest the subducting plate in this section of the Aleutian arc may have partially melted. This interpretation is in sharp contrast to the classical theory that magmas in subduction zone settings are formed as the descending plate de-waters, releasing fluids into the mantle above the plate and causing flux melting of the mantle. By studying these xenoliths, which we think originated in the part of the lithosphere where adakite magmas underwent their earliest evolution, I hope to place constraints on how adakites are formed and how their chemistry changes as they move upwards through the mantle and lower crust of the Aleutian arc. 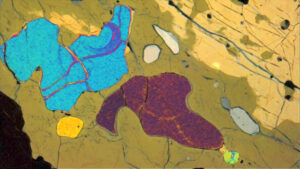 An important part of any petrologic study is understanding the petrography of the samples, looking at thin sections of the rocks under a microscope and studying their textures, the relative abundances of different minerals present in the sample, the shape and size of the minerals, and their relations to each other. Different rocks preserve records of different part of magmatic process, and we can use their textural characteristics to determine where they fit into the larger picture of this complex magmatic system. For example, some of the xenoliths have “cumulate textures”, which indicates that they were formed as crystals precipitated out of a cooling magma body and accumulated together, while other have “protogranular textures” that are more characteristic of mantle rocks that have partially recrystallized after experiencing a small degree of partial melting. Geochemical data cannot be properly interpreted without this basic petrographic context. 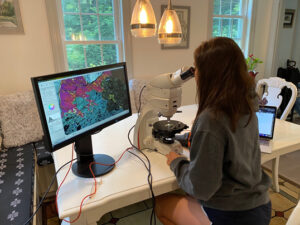 Before the pandemic, I was at home in New Hampshire, visiting my family and using a microscope at the University of New Hampshire (UNH) during the day to study thin sections of these xenoliths. As the severity of the COVID pandemic became apparent, it was clear that I would no longer be able to keep using the microscopes at UNH, and I would have to transition to working from home. I knew that without fully understanding the petrography of the xenoliths, it would be impossible to make progress on this study. I was so unbelievably excited when John, Dr. Carley, and Dr. Hovis asked if I wanted to borrow a microscope from the college for the spring. I set up a mini lab in my parents’ kitchen and analyzed over 70 thin sections during the month of April. This has allowed me to make progress on my research even during the pandemic. Thank you Lafayette Geology!