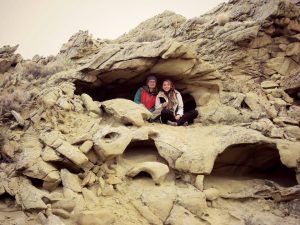 Robyn (on right) with Julia Seidenstein in the Sundance Formation in the Bighorn Basin, Wyoming

I have always been interested in all things old. Growing up, I had a fascination with archaeology and the depth of human existence in time. In fact, I went to Lafayette intending only to study Anthropology to become an archaeologist because I never really considered anything older than humans. That was until I somehow found my way into Dave’s 300-level Paleobiology course as a non-geology major, first-semester sophomore. What happened was my Introduction to Islam course was cancelled several days before classes were to begin and I was scrambling to find a course that fit in my schedule. GEO320-Paleobiology fit. When I arrived on my first day of class, it became exceedingly obvious that this was a course meant for geologists, but that didn’t mean I felt like I didn’t belong. Quite the opposite, actually. Dave began the class by painting a picture from billions of years ago with the formation and evolution of life. Suddenly, all of those old “human” things I had been fascinated with my entire adolescence became exceeding insignificant as I took a ride into Deep Time. I haven’t come back since! 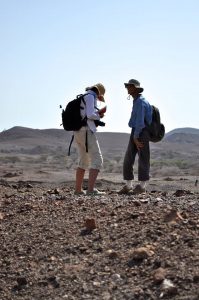 Robyn searching for fossils in Kenya with Meave Leakey

I really took advantage of my time at Lafayette. I was a member of the Women’s Swim and Dive Team which provided me a physical outlet to express myself after long days in the class or lab. I was a Resident Advisor and helped mentor fellow students. Academically, I was a double major in Geology and Anthropology/Sociology. I studied abroad my second semester junior year in Kenya at a paleoanthropology field school where I studied human evolution which was the perfect merriment of my love of archaeology and rocks. A Visiting Professor at Lafayette, Professor Amanda Waite, told me about an internship opportunity in Panama with the Smithsonian Tropical Research Institute and the University of Florida which I was lucky enough to get. I spent my summer in between junior and senior year excavating fossils from the Panama Canal and hopping around the rainforest developing the first geologic map of the Azuero Peninsula. I worked closely with students from the University of the Andes in Columbia speaking mostly Spanish, a language I hadn’t studied since the 4th grade. All of these experiences shaped me into the adventurous, adaptable, excited, well-rounded scientist I am today. 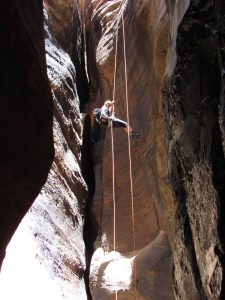 My first Lafayette “ah-ha” moment was when we pulled a 12 million year old dolphin vertebrae out of the clay cliffs in Calvert, Maryland on the Paleobiology class field trip. I remember in that moment the whole class was so excited for me and Dave took it back to Van Wickle and put it on display in our classroom. I felt like I had just discovered a new piece of history. Looking back at that find after years of fossil hunting under my belt, the dolphin vertebrae was nothing spectacular as far as preservation goes and what it can tell the scientific community. But what mattered to me was that I was the first human to touch that vertebrae in millions of years and in that moment I was transported back in time. But the most important point I would like to make here is that this dolphin fossil experience was really the first of hundreds of “ah-ha” moments that I had in my time at Lafayette.

After college, I moved to Grand Canyon National Park to begin what was supposed to be a five month long Geoscientists-in-the-Parks internship. Specifically, I was charged with studying the fossils in the caves of the park. Not much research had been done in the caves and new caves were being discovered every time my then-supervisor and I would go out on an exploration trip. It was a very exciting time. At Grand Canyon I fell in love with the mission of the National Park Service which is to,”preserve unimpaired the natural and cultural resources and values of the national park system for the enjoyment, education, and inspiration of this and future generations.” You see, I wasn’t just studying the geology anymore, I was protecting it. I stayed at the Grand Canyon as an intern for over a year. Vowing one day to return to the National Park Service that I loved, I got offered a position with the Environmental Protection Agency and moved back East. In Manhattan, I managed the clean-up of federally-owned Superfund Sites. It was fascinating work; I dove into the world of environmental geosciences as well as large-scale project management. As a special treat, I worked directly with a good Lafayette friend and fellow geology-major, Rachel Griffiths. I spent two years in New York, with a brief stint in the U.S. Virgin Islands working on Hurricane Irma and Maria clean-up, when I got offered the position of a life-time; to return to the West I loved and work as the geologist of Zion National Park. 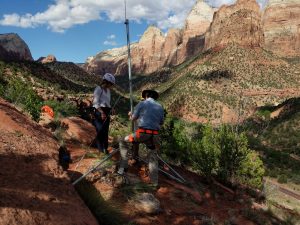 Currently I am the geologist for Zion National Park, living my dream. I study the hydrology and geology of the park and help the park manage the physical resources. Everyday I start off with a question and spend the day figuring out how to answer it, which typically leads to more questions. “What is the likelihood that this 100-foot tall pillar of solid sandstone falls on this historic house?” becomes “What is the thermoelasticity of the Springdale Member of the Kayenta Formation?” Suddenly, I find myself up on ropes rappelling down this pillar installing a vibrating wire crack propagation meter to answer these questions! Another day, I get an e-mail from a local rock enthusiast who believes he found a tracksite in a remote canyon in the park. I recruit him to take me to the site and help me make a 3D model of the 190 million year old Brasilichnium tracks using photos. Working in a park also means you help scientists answer their research questions as well. For example, I spent a week last November following around the wildlife biologist who was putting radio transmitting collars on some of the park’s desert bighorn sheep to see how the different populations interact and migrate throughout the park. I never thought I would ever hold a tranquilized ram’s head in my lap, but now I have.

Many people will likely tell you that you can’t make a living doing what you love and that is not true at all. Be driven in your pursuit of happiness. You likely will have to take a few gigs that you aren’t completely stoked on, but as long as they are bringing you closer to your goal, it is work worth doing. Yet at the same time, don’t be afraid to be changed by your experiences. If I hadn’t stumbled into that Paleobiology class seven years ago, I wouldn’t be where I am today. 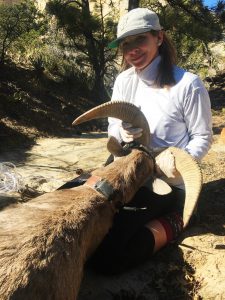 The Lafayette Geology Department believes in you and wants you to be successful. Recognize that and use it. I was fueled the day Dave pulled me into his office and showed me the list of courses I needed to take if I wanted to double major in Geology and Anthropology/Sociology. Without him showing me a path, I would have been lost. Doc M’s recommendation on my behalf got me the job at Grand Canyon National Park. A single unplanned meeting with Kira one afternoon my senior year helped me plan out my future after graduation. Mr. Wilson’s dedication to us the students inspired me every day to reach out to other students in need of help. And those are just a handful of many moments with the Lafayette Geology Department. Find your moments and cherish them.