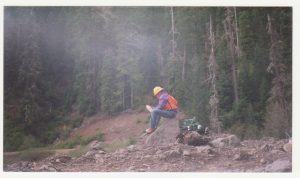 Geology was a great fit for me because I loved the outdoors. I hated being inside.  Even now, I have to get out and take a drive, look at rocks or visually gage a stream.  My career in geology started as a boy running through the fields of straw and stunted native juniper trees in my hometown, Basking Ridge, NJ.  This was before the town was as built up as it is.  Four years in Boy Scouts led me to mapping and to team work.  I knew that the steep hill that we tobogganed down (we crashed and blacked out, and then went home to tell our tale) was a terminal moraine.

When I got to Lafayette, I was an Economics major, but although Macroeconomics was fascinating, I could not see myself, inside again, practicing “the Dismal Science”, so I took Geology in my second year.  The big moment of commitment came during a field trip,looking down at Professor Faas, who was gesturing broadly in the bottom of a glacial outwash basin, pleading for our understanding. I practically grabbed him by the collar in his office that night, and said, “Doctor Faas, you will make me a Geologist”. He said, “John, you won’t make much money.” I said, “I don’t care” and repeated my demand. 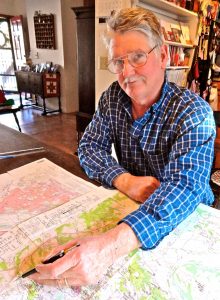 College was very hard for me, but I had avocations; marching band, I helped start the Lafayette Crew and was its 2nd President, College Church and staffed the coffee house in Hogg Hall, the Gourd.  I loved all things that had to do with stratigraphy and mineralogy came easily. I got pounded in Structural Geology and Igneous Petrology and was told that I would never be a structural geologist.
So, what! My mom got me a job interview with a neighbor, who knew me from summer afternoons of my playing Badminton in his back yard.  When we met, he asked me about my courses. I liked stratigraphy, loved the outdoors and knew how to work with people.  I got a summer job between my Junior and Senior years, standing by a drilling rig describing deep soil samples from coastal plain deposits.  I learned the Unified Soil Classification system and how to take several kinds of engineering soil samples. I drew a gigantic geologic cross-section that stretched around the top of three walls in my office.  The company liked it and the cross-section appeared in later years in several publications about the offshore New Jersey Coastal Plain. So in my very first job, I was really digging into stratigraphy.  That experience would keep on bearing rewards for many years to come.
Long story short, I went back to Lafayette for my Senior year with resolve, graduated, worked for the engineering firm, went to Rutgers for graduate school, did an oceanographic cruise off the coast of Panama for 18 days, finished a landslide thesis (now, famous for it), married this girl I met at Douglass College (blue eyes locked and bam!), then went to Oklahoma to work with Gulf Oil. 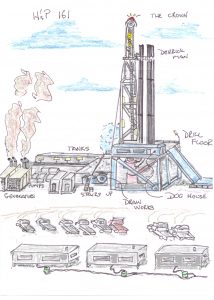 One of John’s field sketches of a Louisiana Oil Rig

At Gulf, I learned that geologic formations can be charted electrically and geophysically. The company research at that time evaluated interstitial voids, and called the doorways between them, “pore throats”. Geophysical and Optical Microscope measures (where is my point-counter?) can be compared to pressure and flow tests and ultimately to well production, be it as groundwater or energy products (shale gas, natural gas, condensate or oil, tar oil).

I am approaching age 66. Recognize that I am in thrall with my field (stratigraphy, structural geology, groundwater, landuse, landslides, streamflow).  My growing up, Lafayette, my first job, my faith and determination made that possible. Lafayette had a determining role.  Good leaders in public office and in business respect the school and the Geology Department.  This means that I got opportunities that dove-tailed. Greater success takes time. Lafayette geologists coming behind me, have experienced the same kind of success in their chosen professions of public service, teaching and consulting. 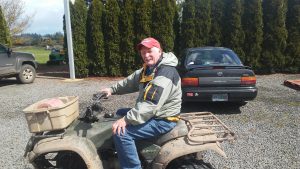 John on a four wheeler at a Oregon Nursery, getting ready to go measure wells

I am still having fun in my field.  Some of my recent consulting has revisited study areas where I worked for the Oregon Water Resources Department, thirty years ago, right down to an aquifer test that I did in 1986.  With the experience that I have gained in the rocks within 20 miles around my home in Salem, Oregon, I was able to figure out why that aquifer test did not demonstrate any interference in the observation wells.  I have a big hearing coming up on a hilltop residential area and will be running more tests with my 2nd son.  Life is rich.